In mid-March, we shifted to a below-consensus real GDP growth outlook for 2017. That timing proved prescient, as cited earlier in this report, when the Citi U.S. Economic Surprise Index subsequently fell a staggering amount during the second quarter.

Our central thesis for the U.S. economy is unchanged: The economy is resilient. The business cycle index model suggests that recession risks are contained. But the economy remains mediocre with fiscal stimulus increasingly looking like a 2018 story and businesses being incentivized to sit on the sidelines until these favorable policy initiatives take effect. We continue to look for an “air pocket” scenario of weaker growth this year. Stronger economic conditions in 2018 will require that Republicans deliver on their promised growth agenda in Congress

Economic mediocrity has not translated into earnings mediocrity. Earnings growth for S&P 500® Index companies accelerated to +14% in the first quarter. There were two catalysts for this strength. First, the stabilization in commodity prices relative to early 2016 provided a large boost to earnings in the energy and materials sectors. This tailwind is likely to prove transitory. But the second force boosting profitability was more fundamental. S&P 500 companies source almost half of their revenue from abroad, and the cycle in Europe and the emerging markets has strengthened notably over the past year.

Indeed, the earnings growth of more globally oriented U.S. businesses was double that of their domestic counterparts in the first quarter. However, we believe it will be very difficult to sustain this strength over the course of 2017. The J.P. Morgan Global Purchasing Managers' Index has already started to moderate from a very high level, and risks are skewed towards “still healthy, but slower growth” in the months ahead. Translation: The first quarter is likely to be as good as it gets for U.S. earnings growth in 2017.

Inflation: a sharp turn in the wrong direction

In her June press conference, Fed chair Janet Yellen noted that “core inflation…edged lower” and that “recent lower readings on inflation have been driven significantly by…oneoff reductions in certain categories.” In our view this belies a much more significant inflation problem. Core consumer price index (CPI) inflation was effectively flat over the three months through May (as indicated by the blue line in the chart on the next page), which is the worst sequential run rate since the 2008 financial crisis. And relative to consensus expectations, this was the worst three-month period for core CPI ever in records dating back to 1997.

The Fed’s preferred measure, core personal consumption expenditure (PCE) inflation, is likely to dip to 1.4% in May, moving away from the Fed’s 2% inflation target. A key question for our mid-year outlook is whether this recent disappointment simply represents noise in the data (as Yellen is suggesting). We think the downside to inflation could prove more persistent for several reasons: A price war in the telecom industry has had an outsized impact on the official inflation statistics, but shows no signs of abating in June; oversupply problems in the automobile industry are dampening pricing power and likely to persist; a significant build-out in multifamily homes is dampening rental price inflation; and technological change is exerting a disruptive, disinflationary force on the retail sector.

Given our caution around the near-term outlook for both growth and inflation, we think the Fed will be forced to stop its hiking process for the remainder of the year. The Fed does seem very committed to winding down its balance sheet, and we expect them to start that process later this year. The key for fixed income markets is that the Fed wants to do this in a gradual and predictable way. Our analysis suggests that balance sheet normalization should add only one- or two-tenths of a percentage point to U.S. 10-year Treasury yields each year. As such, we continue to look for the yield to slowly shift up to 2.5% over the next 12 months. 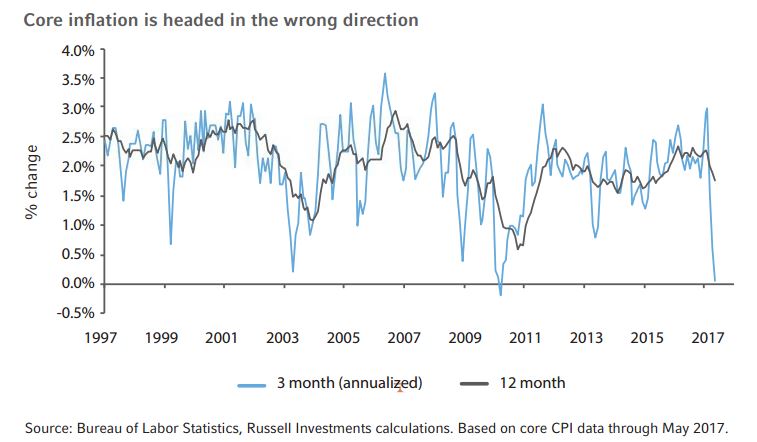