The September U.S. CPI print came in above expectations, at 0.6% month-on-month (6.3% year-on-year). Whilst there was a step down in durable goods prices (including used cars and electronics), the stickier parts of inflation including shelter and services (which are more wage sensitive) continued to show strength. The chart below shows core CPI split into those stickier parts, which continue to rise, and durable goods, which are slowing. 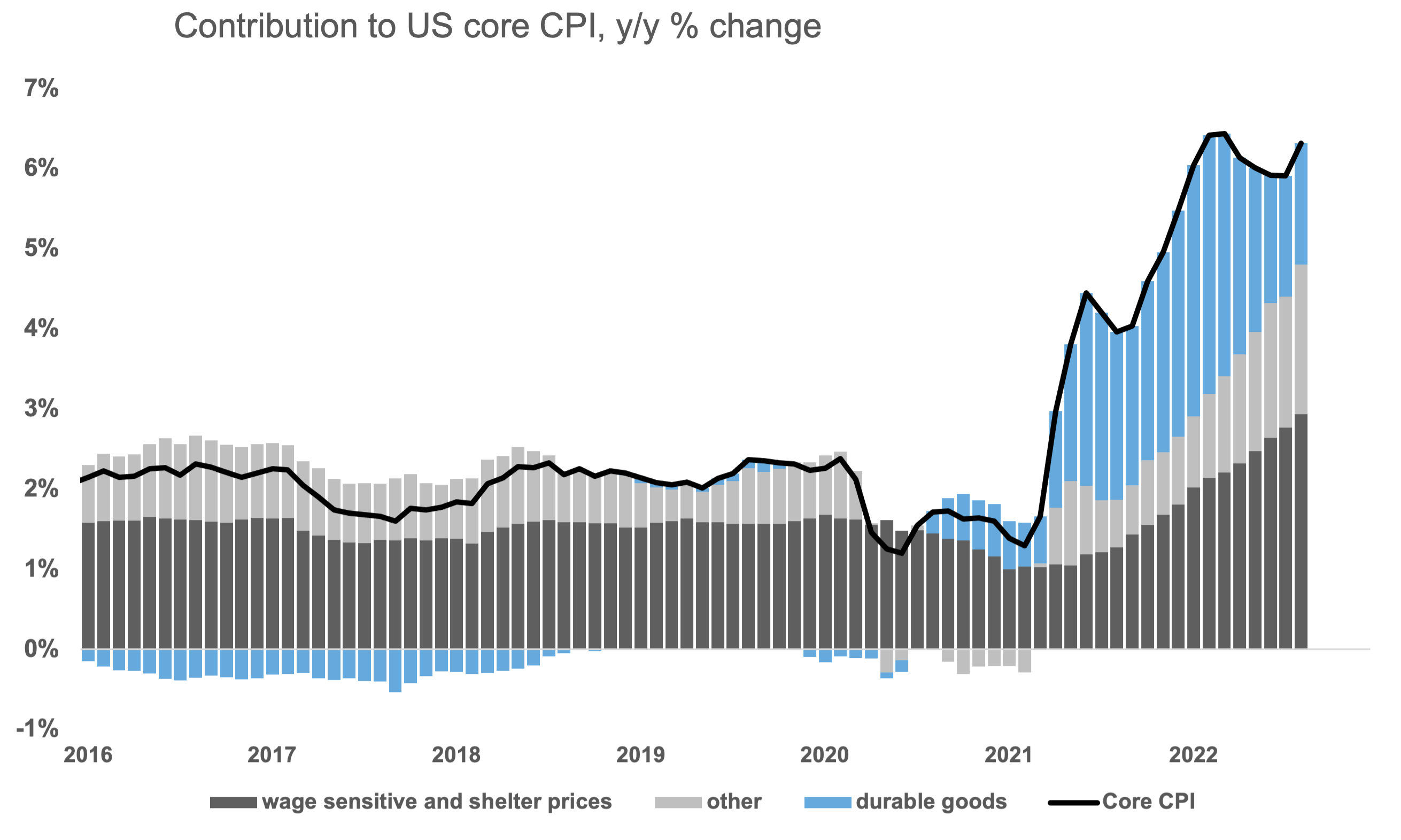 Importantly, this dynamic and the absolute level of inflation, is still uncomfortably high for the U.S. Federal Reserve. This CPI print was the last big data release before the Federal Reserve’s November FOMC meeting, and we think that this higher-than-expected inflation almost cements another 0.75% increase in the Fed Funds rate. If that were to eventuate, that would bring the cash rate significantly above our estimate of the neutral interest rate (the interest rate at which monetary policy is neither a tailwind or headwind to the economy), and thus we believe monetary policy would be outright contractionary. After the data release, fixed income markets have been increasing the probability of another super-sized rate hike in December and a peak Fed Funds rate of 4.9%, which is very high relative to the neutral cash rate.

We also got the Atlanta Fed wage tracker, which looks at wage growth for a matched sample, so it provides a cleaner read into the underlying wage pressures in the economy. It showed a step down in wage growth, as shown in the chart below, but we consider this still too high at 6.7% year-on-year. The labour market has thus far been very resilient in the face of a slowing economy, but we do expect that cracks will start to emerge soon – one of the watchpoints we are monitoring through this quarter’s earnings season from U.S. companies is the outlook for hiring and layoffs within listed companies.

The bottom line from this inflation report is that inflation is still too high and will require further action from the Federal Reserve. Given that interest rates are already above neutral, this will mean the central bank will be putting a further handbrake on the economy, increasing the risks of a recession next year. We have recently increased our subjective probability of a recession to 55% given these dynamics. That said, we do expect that the recession will be fairly mild (rather than a deep and prolonged recession) as household and corporate balance sheets are in pretty good health.

In terms of portfolio positioning, we recommend sticking to strategic asset allocations on equities. Whilst recession risks are rising, we think that a lot of this risk is now priced into equity markets. The chart below shows the drawdown of the S&P 500 and average recession experiences. As you can see, the average cyclical drawdown (a la the type of recession we are expecting) is close to 30% and we have already seen a 25% drawdown so far. We do think that government bond valuations are becoming more attractive, particularly on the shorter end of the Australian government bond curve and the middle part of the United States government bond curve. The rationale for this is that the fixed income markets are already pricing a very aggressive Fed (and in the case of Australia, the pricing is a bit too aggressive in our view) and in the event of a recession we expect that interest rates will decline precipitously. 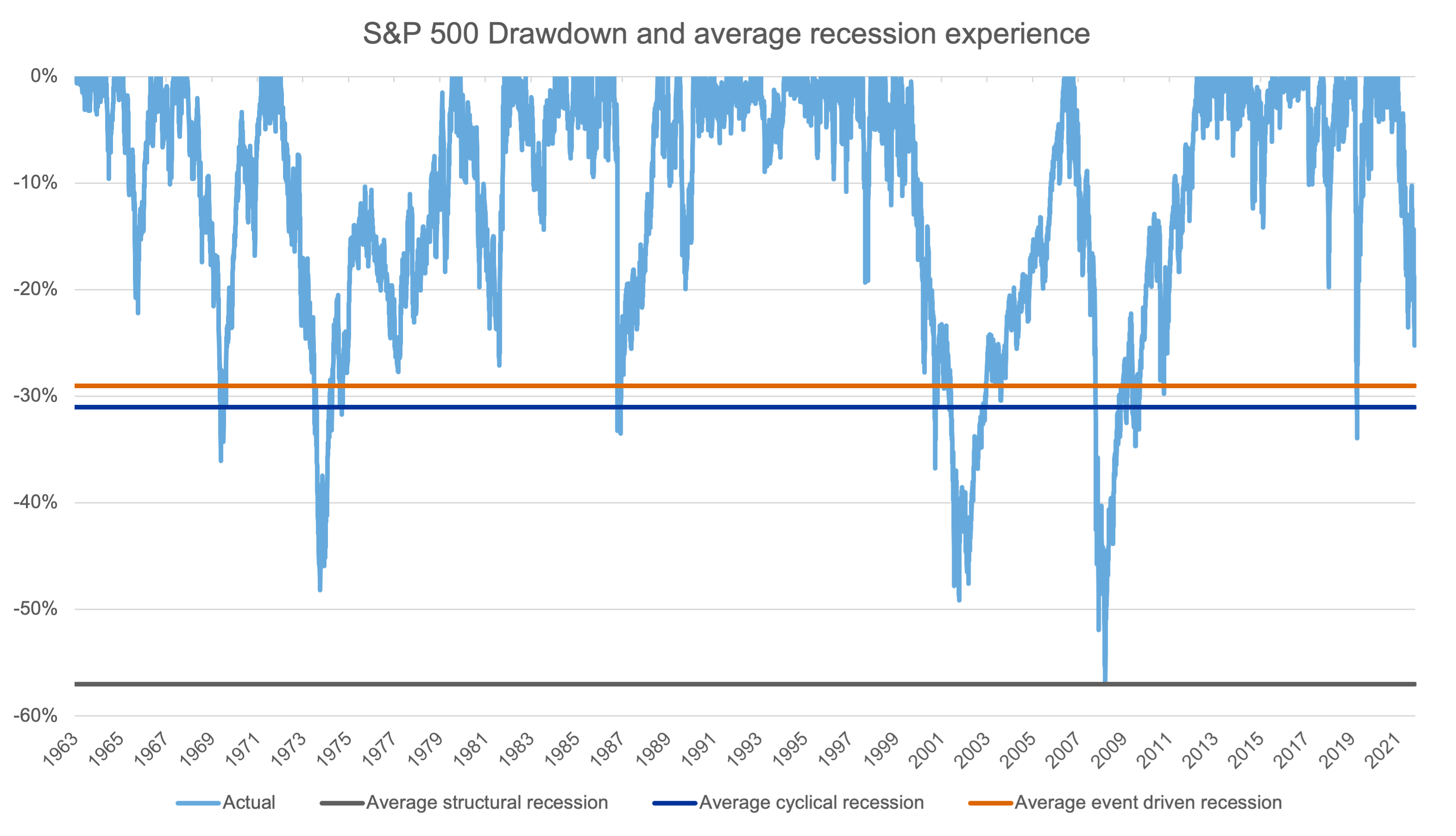