Taxes: Potential benefits of kicking the can down the road

One thing we are all guilty of is putting off things that we do not enjoy doing. Whether it is homework, housework or any other unpleasant activity, often we end up kicking the can down the road and defer these chores until it is absolutely necessary. The Cambridge Dictionary defines the phrase as to avoid or delay dealing with a problem. However, when it comes to investing, there is a scenario where kicking the can down the road for as long as possible can provide a significant benefit and improve an investment outcome: paying taxes.

When invested capital appreciates, generally taxes are owed on the amount of that appreciation or amount of realized capital gain. For mutual fund investors, how this tax is paid can vary. One way is if the fund pays a capital gain distribution in which the fund distributes realized gains to current shareholders (typically at the end of the year), who then owe taxes on the distribution. These distributions can often cause an issue for investors who have no control over their magnitude or frequency and may result in an unwanted tax bill—even in situations where they recently purchased the fund and their investment has not gone up in value. While this can be frustrating for investors, this pay as they go system also allows them to pay their taxes over time, which could result in a lower tax bill in the future.

The other option is to defer the capital gain distribution for as long as possible, or to “kick the tax can down the road”. The gains are deferred—to the extent possible—to when the investor sells all or part of their investment. At this later date, if the fund has not made any capital gain distributions to the investor, taxes will be owed on the full amount of the deferred gain. This may create a larger lump sum tax payment at that time, however the investor has control over when the gain is recognized.

From the perspective of a taxable investor, is one of these methods preferable? Pay–as–you–go or deferring gains? Let’s walk through an example.

Each year mutual funds are required to distribute realized gains that resulted from shares sold that year. The blue bars in the chart below shows the calendar year returns of Canadian stocks going back to 2001. Additionally, the red line shows the average capital gain distribution for Canadian equity funds as a percentage of the investment value. Note that since 2001, the average capital gain distribution has ranged from 2% to 7% of a fund’s value.

It also is important to note that the gain for any particular year has not been directly related to the return for that year. For example, some of the years that delivered large returns have shown relatively small capital gain distributions (2003 and 2009), while some of the larger distributions have happened in years with negative market returns (2002, 2008, 2011, 2015 and 2018). 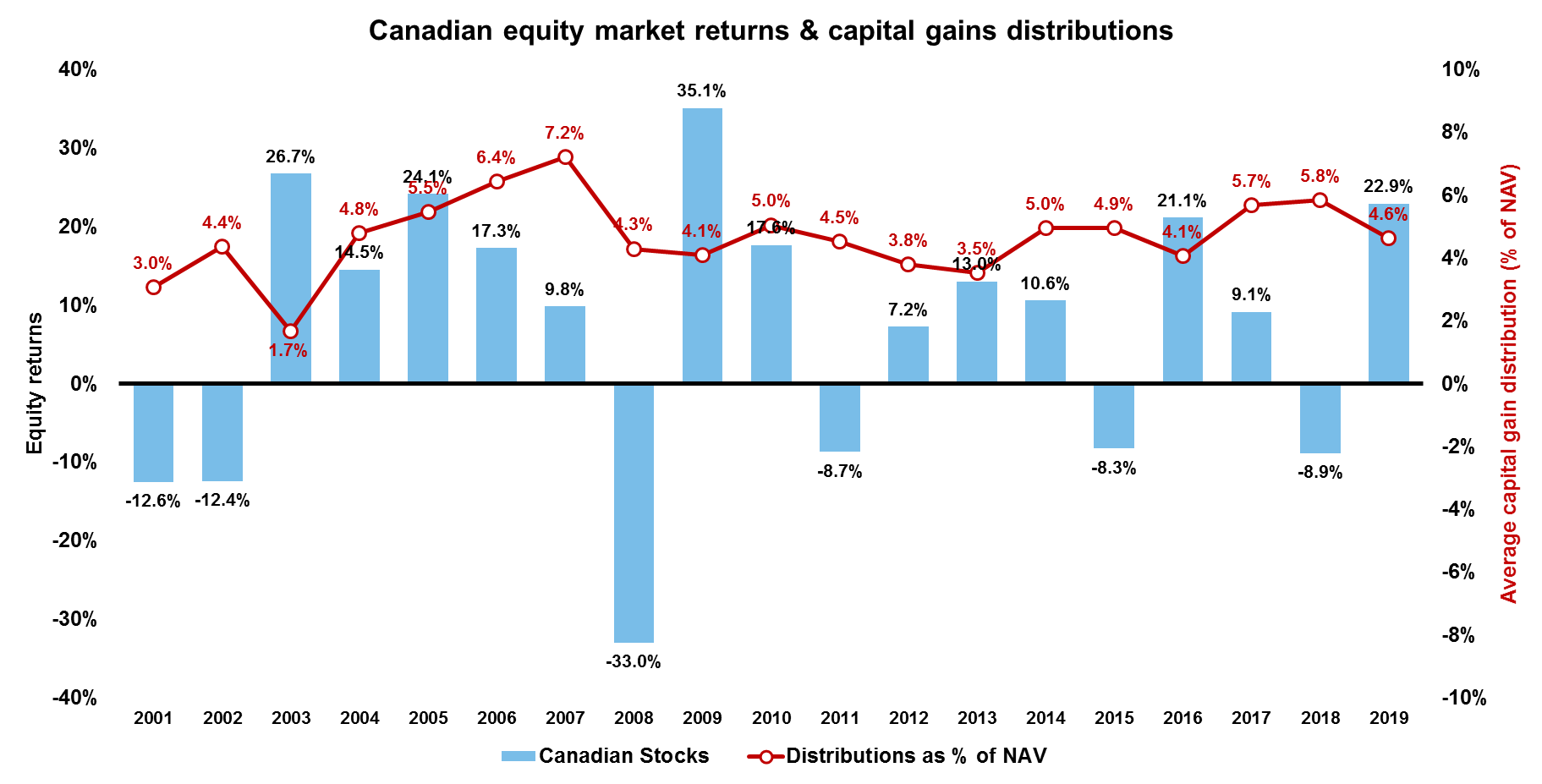 Now imagine two different investors: One who follows a Pay–as–you–go strategy while the other uses the Defer strategy. Let’s assume both investors are in the same tax bracket, started investing in Canadian stocks in 2001 and sold (liquidated) their entire portfolio at the end of 2019.

The Pay–as–you–go investor receives the average capital gain distribution every year shown in the chart above and accordingly pays taxes along the way (in the example, we assume the taxes owed are deducted from the investor’s account).

The Defer investor does not receive any capital gain distributions and pays no taxes along the way. However, they will owe all pertinent taxes once the portfolio is sold.

Although every year each investor earns the same rate of return and is in the same tax bracket, they will wind up with very different tax experiences. These differences are broken out in the table below.

Comparing the table above, a long–term investor may be indifferent between the two approaches. With the same rate of return and same tax rate for each scenario, one may assume that each produces the same result.  Most would believe that the Pay–as–you–go and Defer strategies ultimately end up in the exact same place, with the only difference being when taxes are paid.

However, as can be seen in the chart below, the investor who did not receive any capital gain distributions and was able to defer paying taxes until the end comes out meaningfully ahead of the Pay–as–you–go investor. Over the full time period, on an after–tax basis the Defer investor earned a total rate of return of 156% compared to 136% for the Pay–as–you–go investor. Based on a starting account value of $500,000 this results in an additional $101,300 of wealth for the defer investor, which represents 20% of the initial amount invested.

This is because taxes impact portfolio values in two ways:

1) In the same year taxes are paid

The first point is obvious. Everyone realizes the impact taxes have as they are paid and their portfolios are immediately reduced.

However, what is often overlooked by investors is the second cost. This represents loss of possible future returns on money that could have remained invested to continue to grow in subsequent years instead of being used to pay taxes. It is due to this power of compounding that a Defer strategy is preferable to Pay–as–you–go.

While the simple example illustrated here assumes both investors liquidate their portfolios at a given moment, it also is important to note that many real–life cases do not work this way, providing possibly even more tax benefits to investors who try to defer gains than those described above. For example, if an investor decides to drawdown the portfolio over time instead of immediately liquidate, this allows for further compounding within the portfolio, expanding the benefits of deferring taxes.

Considering taxpayers are often in lower tax brackets in retirement years, this benefit would accrue even more to the investor following the defer strategy. Conversely, if the investor was in a higher tax bracket when the portfolio was liquidated, this may result in paying more taxes than if drawdowns were spread out over subsequent years.

There also can be significant benefits associated with deferring gains related to estate planning. Actions such as gifting shares to individuals, donating to tax–exempt entities such as charities or passing investments on to beneficiaries who receive a step–up in cost basis all can significantly reduce—or even eliminate—the tax consequences of the deferred capital gain. Ultimately, by deferring gains the investor may end up with a larger amount of after–tax wealth and remain in control of when the taxes are paid.

Nobody enjoys paying taxes and many of us would prefer to put this off for as long as possible. When it comes to investing, not only can you take steps to make that happen, but you actually have the opportunity to improve your investing results by doing so. Taking an active approach to tax–efficient investing by utilizing strategies that have the potential to defer gains for as long as possible provides investors with greater flexibility in terms of when their gains may be realized and can lead to better after–tax investing outcomes. Kicking the can down the road can actually be a good thing.