Dividends in Australian Shares – is the Covid lockdown lifting?

What happened during reporting season?

In many ways, FY20 reporting season was one of the most closely watched in recent memory as investors attempted to understand the true impact of the COVID-19 pandemic on company fundamentals. Going into the end of the financial year, expectations for earnings had been slashed significantly due to the level of uncertainty that remained in the outlook for the economy. Whilst there was stock level volatility and divergence (as always), reporting season for FY20 was largely better than expected though FY21 earnings expectations were downgraded1; the ASX300 returned 3.05% for the month of August1.

Although results were better than expected at the aggregate level, many companies did not give guidance for FY21 due to the uncertainty that still looms over the next twelve months in the economy. Companies may provide updates during AGMs in Q4, however it is difficult to know if additional clarity will be available at that point in time.

There were some notable themes at the sector level. The consumer discretionary sector was a notable space for earnings upgrades as the ‘work from home’ theme drove strong increases in sales. JB Hi Fi and Harvey Norman were beneficiaries of this, outperforming by 9.5% and 15.8% respectively through August1. Whilst bank results were mostly in line with expectations, FY21 earnings for the sector was downgraded on the back of net interest margin pressures, as well as uncertainty for the economy once fiscal stimulus has ended or is tapered significantly. Resources companies remain resilient and reported earnings upgrades in aggregate; iron ore miners remain well bid as the commodity market dynamics remain favourable.

What happened to dividend expectations?

Due to the level of uncertainty that remains for the coming twelve months and the hesitation from companies to give guidance, it is not surprising that we did not see much in terms of news flow around dividends relative to expectations. At the end of July, APRA eased restrictions around paying dividends for banks however payout ratios for Authorised Deposit-Taking Institutions (ADIs) will be maintained below 50% for this year. Whilst this is a small positive, the outlook for bank dividends remains significantly below what investors have come to expect. ANZ, CBA, and NAB announced dividends, however Westpac confirmed that an interim dividend will not be paid. Once factoring in reporting season, approximately 35% of companies in the ASX200 have deferred, cancelled, suspended, or declared no final dividend2. The outlook for dividends at the aggregate market level remains subdued and shrouded in uncertainty, i.e. not dissimilar to the environment before reporting season. In saying that however, alongside the thematic that earnings were better than feared, it appears that the outlook for dividends has potentially seen a bottom – at least for now. 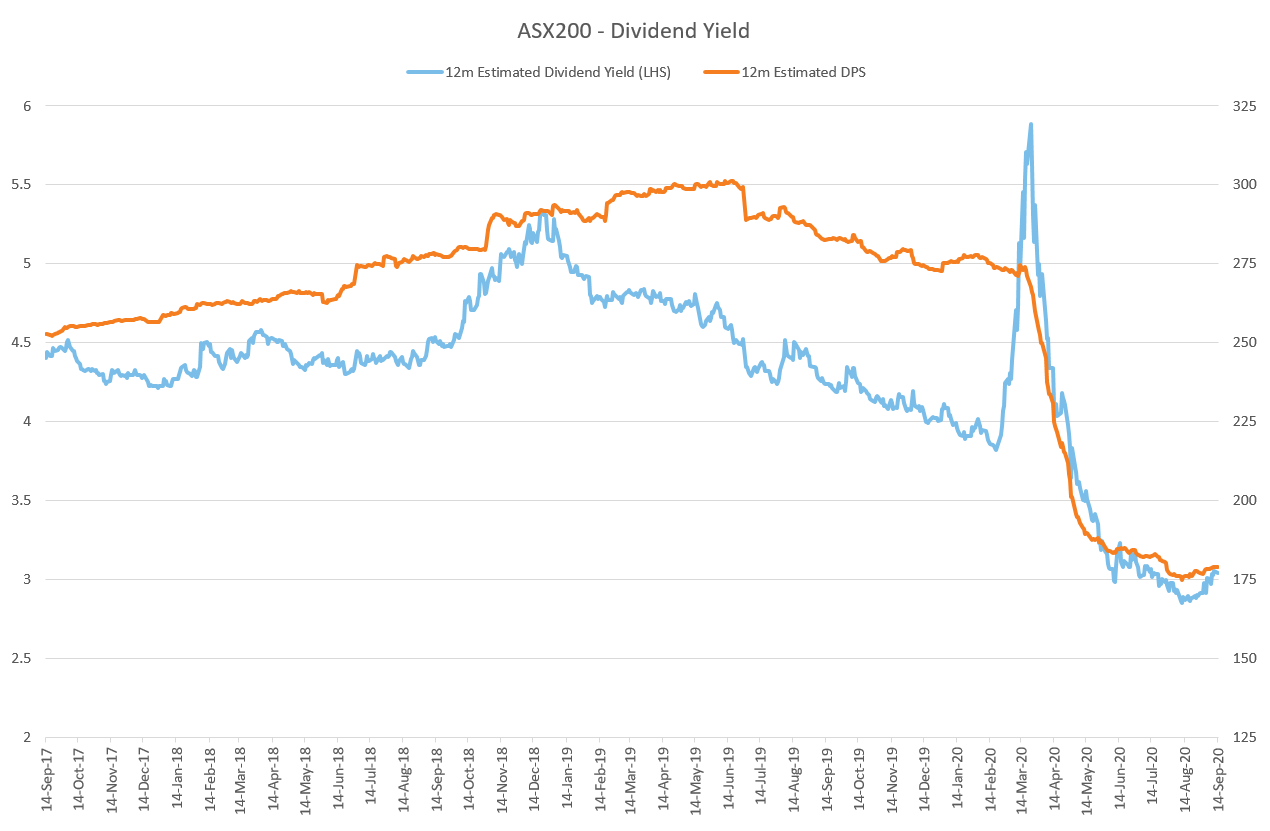 The expected dividend yield for the Australian market, which has historically been viewed as a high dividend yield market, is now around 3%1. This is significantly lower than the 20-year average dividend yield of 4.3%1.

How did our ETFs perform?

RDV benefitted from exposure to retail and the ‘work from home’ theme noted above via overweight positions in Harvey Norman and JB Hi-Fi. Exposure to a number of companies that reported ‘better than feared’ results also added value, particularly in tourism-related parts of the market. Star Entertainment and Flight Centre outperformed the broad market on the back of their results.

RARI also benefitted from exposure to strong retail names such as Super Retail group and Premier Investments, as well as ‘better than feared’ results in Qantas and Stockland Group. Rio Tinto is excluded from RARI’s holdings due to its involvement in, and risk attributable to, mining activities. This benefited performance over the month of August, as controversy related to the company’s blasting of indigenous sites weighed on the share price. This caused significant shareholder backlash, and exposed some questionable, if not poor, governance practices within the company. Subsequently, the CEO and a number of senior executives have departed. We continue to see strong demand for ESG related products and growing concern around active ownership and governance. Russell Investments recently received ‘Leadership’ status from RIAA (Responsible Investment Association Australasia) and is well placed to deliver broad based responsible investing solutions to our clients.