Reporting season for Australian companies is around the corner and following that is the reconstitution of RDV’s holdings. RDV’s underlying index is reconstituted twice a year in March and September. This timeline allows consensus forecasts (which feed into the underlying methodology) to be updated after companies report on earnings in February (half-year) and August (full-year).

The underlying methodology of RDV aims to build a portfolio that pays a relatively high gross dividend yield to investors versus the broad Australian market and provide investors with a consistent source of income. Whilst it is important to look at the historical dividend characteristics of a stock, RDV’s methodology also focuses on forecast dividend yields as well as a stock’s earnings variability to assess whether a stock is suitable for the portfolio.

To get an idea of how RDV may be positioned after this February’s reporting, we can take a look at an example from last year’s reconstitution to see the type of stocks that are attractive to the methodology.

During the end-March 2019 reconstitution, JB Hi-Fi(JBH) was added to RDV at a weight of 2.2% based on the underlying yield characteristics of the stock. As of 20th January, 2020, JBH stock returned 64.8%1 since being added to RDV, adding value for the investors.

Why was JB Hi-Fi added to the portfolio in March 2019?

At the time of the RDV reconstitution, JBH scored well relative to the large cap Australian market on both forward-looking and historical metrics: 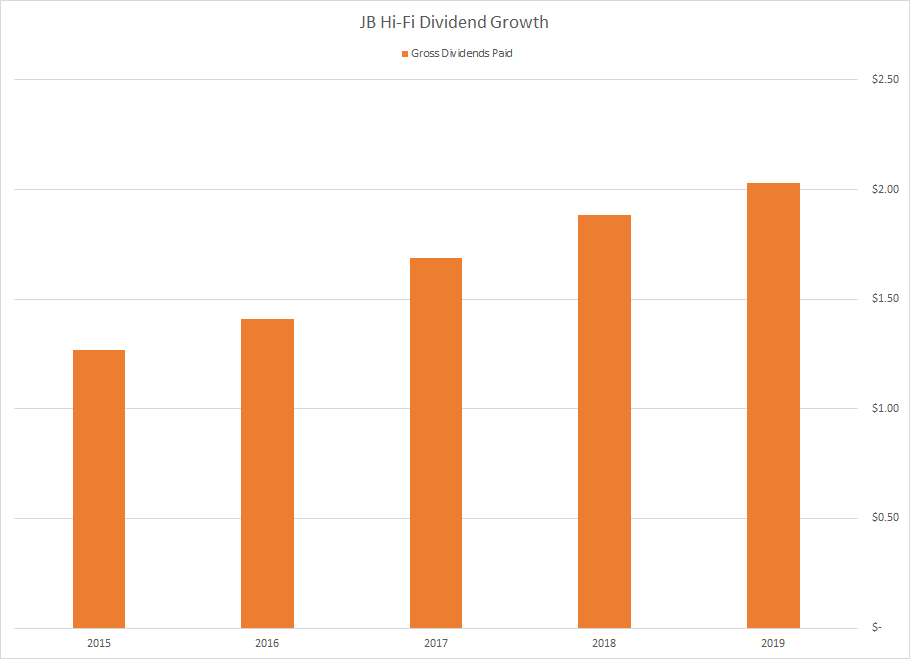 What has happened since JB Hi-Fi was added to RDV in March 2019?

In May 2019, the surprise federal election result which saw the LNP retain government drove the Australian equity market higher, as the market was pricing in a result that would have negative impacts for the economy. Before the election, economic growth forecasts had been downgraded and economically sensitive segments of the market, such as retailers, had been underperforming. In short, the stock was out of favour as there was significant negative news priced into the stock. The election result drove a significant pickup in consumer sentiment and the stock rallied over 14%6 up to when the company reported in August, alongside other retailers. The company reported FY19 earnings in line with expectations and increased its dividend relative to the previous year which was well received by investors. After a positive sales update in October, the company continued to rally through the end of 2019 and into 2020, further buoyed by a strong retail sales print in Australia.

RDV’s position in JBH showcases RDV’s methodology, specifically how looking at metrics outside of trailing dividend yield, such as forward-looking yield and earnings variability, and diversify the yield sources for investors and contribute towards the portfolio’s overall return.

We will provide an update on in April 2020 on key changes to RDV following company earnings season.