Rebounding with the RBA on hold

We recently released our Global Market Outlook titled ‘The Old Normal’, which focused on the early cycle dynamics that are at play in the global economy. We are coming out of a short, but very sharp, recession and are in the beginning of the recovery phase. This allows for a period of low-inflation, low-interest rate growth that favours equities over bonds.

The recovery in Australia is underway – Gross Domestic Product (GDP) in Q3 came in slightly above expectations, with household consumption continuing its rebound following the lockdown. There will be a boost in the Q4 print, as the Victorian economy has reopened. This improvement should continue next year – households have a lot of savings that they can start to draw on as confidence increases. The level of household debt remains a risk, but with interest rates at such low levels, this shouldn’t impede the recovery too much. 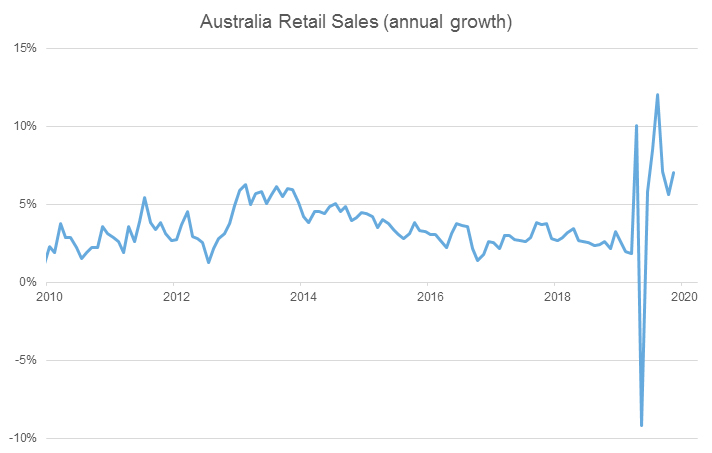 The news around the vaccine has continued to improve, with inoculations having already begun in the United Kingdom and the United States. The vaccination, and resumption of international travel, will present a significant improvement to the Australian economy given the importance that tourism and international students hold for the economy. Australia is often thought of as simply a resource exporter, but education and tourism together make up close to 15% of our exports. The complete reopening of the border at this stage looks like it may not happen until the end of 2021, however there will be ‘travel bubbles’ in the meantime – for example, the arrangement in New Zealand that will start in early 2021.

Australia’s policy setting is going to remain in very accommodative stance through 2021. The government have explicitly committed to maintaining deficit spending until the unemployment rate is below 6%, which is unlikely to occur next year. The RBA are going to keep the cash rate at 0.1%, and are likely to expand their purchase of longer term government bonds, in an attempt to keep Australian government bond yields closer to the US and thus alleviate some of the upward pressure on the Australian dollar.

So, what does this mean for the outlook for markets? Firstly, that Australian equities should outperform Australian bonds. Secondly, that within the equity market, we expect to see a rotation towards those more cyclical parts of the market that are cheap and higher beta to an improvement in economic activity, at the expense of the more expensive growthy parts of the market. In this scenario, we would expect to see banks and REITs outperform at the expense of more defensive consumer and healthcare stocks which have benefitted from the COVID-19 dynamic through 2020. As well as attractive valuations relative to history and the market and an improving economy, APRA’s easing of dividend restrictions for the banks should provide additional tailwinds for investors over the next 12 months.

As the outlook improves through the year, we are also likely to see a search for yield given the RBA (and other central banks for that matter) keep interest rates close to zero and maintain various forms of quantitative easing. Both Russell Investments equity ETFs, Russell Investments High Dividend Australian Shares ETF (RDV) & Russell Investments Australian Responsible Investment ETF (RARI), are well placed to benefit from this trend - given their yield focus and overweights to banks and REITs. 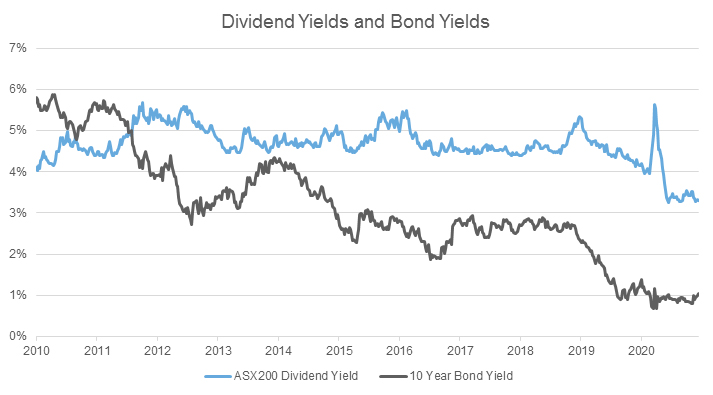 We would like to finish on the outlook for China, and the deterioration of the diplomatic relationship between Australia and China. The Chinese economy has seen a dramatic recovery this year and is now back to pre-COVID levels of output. This is quite extraordinary given that the International Monetary Fund expects we won’t see something similar for most developed nations until 2022 at the earliest. Credit growth has accelerated, and we are seeing a big jump in steel production and infrastructure. There have been concerns from officials about the rise in credit, along with rumblings around the default of a State-Owned Enterprise. All this together, we think that we are going to see a tightening in some of the policy settings in China – but growth should remain robust.

Finally, on the relationship between China and Australia which has clearly deteriorated. This has led to several Australian exports facing increased tariffs and duties. One thing to note is that some of these exports (for example, barley) had been under anti-dumping investigation for a while and so not all of this is necessarily politically motivated. Similarly, the headlines around coal were until recently more about the quotas on coal imports that Chinese authorities enforce. We think that the relationship will remain heated but is unlikely to escalate to goods that will significantly impact the outlook for the Australian economy. We are closely watching any decision by the Australian government to threaten a duty on iron ore exports – because of the size of the iron ore market relative to other markets, a very small duty (1%) would offset the damage from the current tariffs that China have put in place – and whether this sees a tempering in China’s approach towards Australian imports. The other watchpoint is the extent to which the new Biden administration can reduce some of the US/China tensions – which Australia could benefit from given its position as a loose US proxy in Asia.