Recession: Is it still unlikely in the U.S?

These days some wonder about a potential recession, as we’re eight years into a long U.S. economic expansion and the S&P 500® index keeps making record highs (and getting more expensive), up 14.25% on a year-to-date basis as of March 30, 20171. Such growth is just one reason that a good read on the U.S. economy is crucial for portfolio management.

As such, our team of investment strategists regularly evaluates recession risk with both confirming indicators and contrarian indicators. With such research, as our latest Global Market Outlook Q2 Update notes, we’ve concluded that a near-term U.S. recession is unlikely, but we should monitor this aging cycle of market growth.

The Business Cycle Index (BCI) tracks the health of the U.S. economy by looking at confirming indicators like job growth, consumer spending, and measures of financial risk. The index estimates the probability of recession in the next 12 months is only 20%.2

Recession risks have been gradually building over the last few years but declined a bit more recently. I believe that the recent decrease in recession probability is driven by a steepening yield curve3 and lower credit spreads4—indicators that reflect potential stronger future growth expectations and likely lower financial risk forboth the economy and investors.

Why optimism can matter

In my view, this optimism around the economy is echoed through a range of business, consumer, and CEO surveys. These data points show increased confidence in the U.S. economy.  However, it may be difficult to reduce U.S. recession probabilities to the levels we saw two years ago, when the BCI pegged the average 12-month recession probability under 15%, given we’ve already had such a long economic expansion. The pace of job growth is still steady, but we believe it is likely to moderate as we push towards full employment. 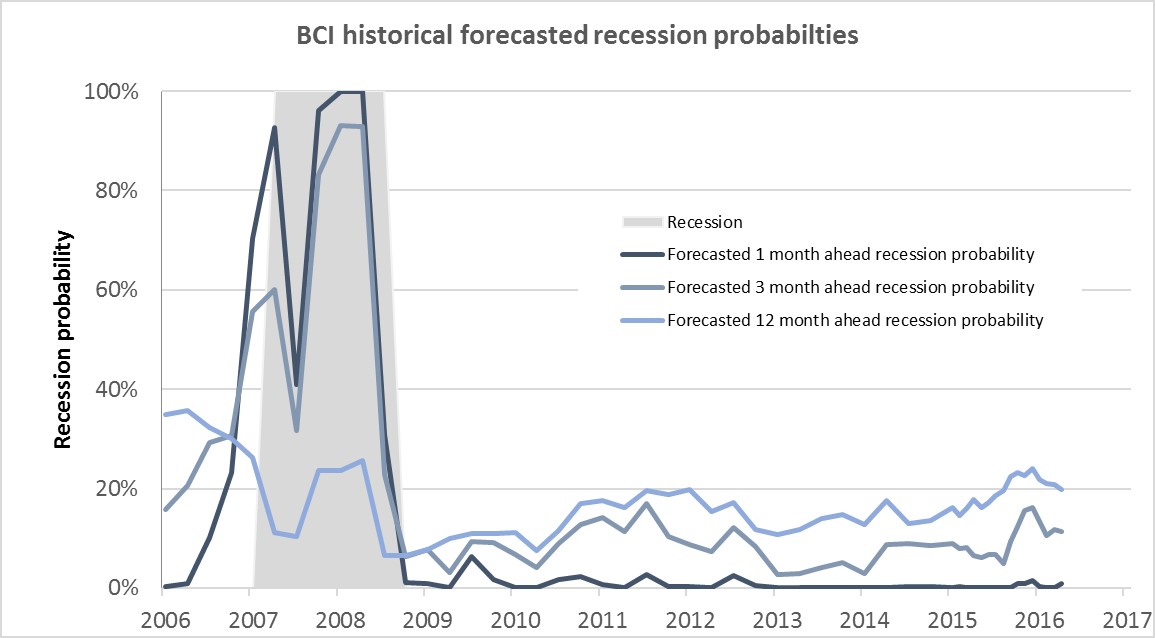 Russell Investments strategists also check for signs of an overheating economy with our internal research. This research combines data from the labor market, business investment, household debt and business borrowing, among others. This is how we came to believe that the unemployment rate has dropped below its sustainable level, suggesting that the labor market may be overheating.

History tells us that when unemployment is very low, employers are often forced to bid up wages to attract a scarce pool of qualified workers, which can gradually cut into corporate profits. Firms often respond to weak profits by cutting investment and hiring, hurting consumer spending, which can feed into a negative spiral, and start the onset of a recession.  In the last nine economic cycles, looking at the BCI, it historically took an average of 2.5 years from the time the unemployment gap closed until the next recession.

Overall, our team of investment strategists thinks that the U.S. economy is still on a path of moderate growth with low probability of recession—see the latest Global Market Outlook and learn more on our U.S. economic outlook.

In our view, short-term (one to 12 month) recession probabilities fell in the last quarter, driven by strong economic data. We believe that medium-term (two - three year) recession risks are building as the U.S. cycle ages. We believe investors need to consider a multi-asset approach to help maintain a balanced risk portfolio and look for opportunities to buy the dips and sell the rallies.

3 The steepening of the yield curve is a result of changing yields among comparable bonds with different maturities.

4 Credit spreads is an indicator of default risk and a proxy for general financial risk/stress. Credit spread is the difference in yield between a risky asset (ex: corporate bonds rated at BAA) and a safe asset (ex: US government bonds). When the yield for the risky asset is very high compared to the yield for a safe asset, it means that investors think the risky asset is extra risky, and want to be compensated with a higher yield to hold this extra risky asset. An investor might think this asset is extra risky because he/she thinks the corporation may default on the loan.