With the extended May 17 U.S. tax deadline fast approaching, now is an appropriate time to take stock of how the U.S. municipal bond (muni) market has fared so far this year, and what we think could happen in the months ahead.

As we discussed in our last post, in late February, munis became too expensive compared to U.S. Treasury bills and sold off sharply, with muni yields spiking. A few months later, however, as U.S. Treasury yields continued their upward path (with their prices falling) due to rising inflation expectations, muni yields hung tough and prices remained firm on strong investor demand (see Figure 1 below). This meant that while the investment grade taxable bond market (as measured by the Bloomberg Barclays U.S. Aggregate Index) booked a -2.3% decline in the year to May 7, municipals (as measured by the Bloomberg Barclays Municipal Bond Index) returned 0.7%. This is a very big difference. The sub-investment grade market tells a similar story, with the Bloomberg Barclays Municipal Bond High Yield Index’s 4.0% year-to-date return (as of May 7) reflecting a 1.8% excess over the Bloomberg Barclays U.S. Corporate High Yield Index return. 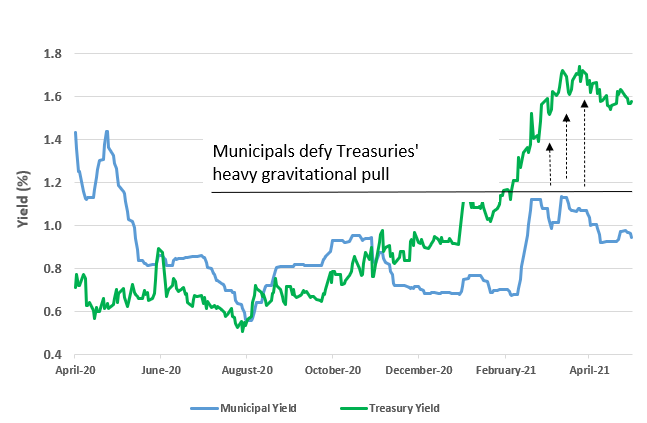 While it may not be reasonable to expect munis to similarly outperform their taxable counterparts in the months ahead, they may still be able to resist (to a degree) further Treasury yield increases. Here’s why:

Municipal yields (along with their performance) are still influenced by the direction of U.S. Treasury yields. A surge in U.S. government yields above 2% will surely drag municipal yields along. However, just as our tax deadline has been extended this year, it’s reasonable to expect any selloff in munis to be delayed over the next several months given compelling technical and fundamental factors.