The Year of the Rabbit: China's 2023 growth outlook

2023 is set to be a year of fading economic growth, with recession risks elevated in both the U.S. and Europe. However, the economic situation in China appears to be improving as the three big challenges that China has imposed on itself begin to alleviate. In this article, we’ll discuss why we think that 2023 could be the year that China pulls the rabbit out of the hat and achieves solid economic growth.

We have discussed the challenges China has faced in previous articles—namely, the zero-COVID policy, a struggling property sector and tech regulation. Since December, we have seen increasingly encouraging news on all three fronts.

It has been well documented that China is in the midst of reopening its economy after three years of its stringent zero-COVID policy. Right now, the virus is spreading quickly and it is hard to get reliable data on the scale of the outbreak, given that testing requirements have been dropped. Plausible estimates suggest that close to 30 million people a day are contracting COVID-19. In the near term, this is likely to put further strain on the healthcare system and could lead to some reversals of the reopening approach in certain areas. As the end of February approaches, however, it is likely that a substantial proportion of the population will have developed some level of immunity to the virus.

Like the phenomenon that we saw in developed countries, there is substantial pent-up demand within China. Travel bookings for the upcoming Lunar New Year are significantly higher than the last two years, and Chinese consumers have built up a significant amount of savings—it is estimated that there is close to $900 billion in excess savings. Of course, those savings are not equally distributed, but should nevertheless provide a boost to domestic consumption through 2023.

The Chinese government has also been loosening some of the restrictions that it placed on the property sector—chiefly, around the three red lines policy that aimed to reduce the amount of debt property developers had. The easiest way to show this alleviation is through the credit spread of Chinese high yield U.S. dollar (USD) bonds—that is, the extra interest rate offered for Chinese high yield bonds (issued in USD), relative to U.S. Treasuries. Property developers account for a large majority of USD high yield issuers, comprising nearly 80% of the index. After peaking at above 30%, these spreads have come down to 14%. It is important to note that this is still an elevated level, but a vast improvement nevertheless. 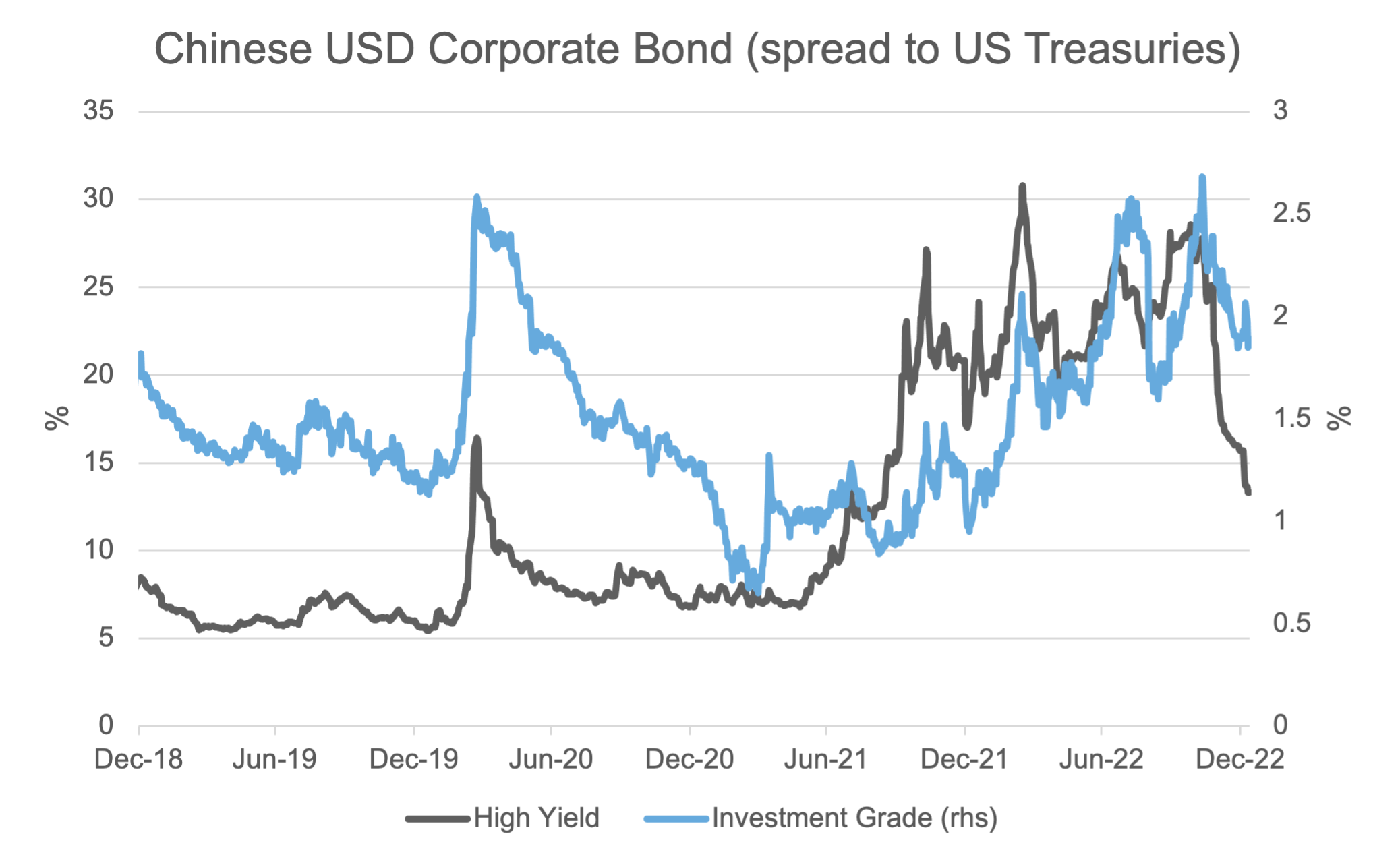 The reason for this is that the Chinese economy has three key engines that it can utilize to boost growth: net exports, construction and consumption. Given our view that the developed world is going to slow this year, we believe net exports will be challenged. While the pressures in property are being alleviated, it is unlikely that we are going to see a big recovery in property construction this year. However, we do believe that we’ll see a pickup in infrastructure construction, given the rise in project approvals seen in 2022. This leaves household consumption as the most reliable potential driver through 2023, and so we think that government policy will be targeted this way.

Second, a stronger Chinese economy would likely provide support for commodities—especially energy and base metals, given the increasing travel outlook and the potential for more infrastructure spending.