The RBA surprise markets and increase the cash rate by 0.5%

The Reserve Bank of Australia (RBA) raised the cash rate from 0.35% to 0.85% at the June meeting, in a further step to remove some of the policy support that has been in place since the onset of COVID-19. This is the second meeting in a row where the RBA have surprised the market – expectations were for either a 0.25% or a 0.40% increase at the June meeting. Looking ahead, the RBA have kept the door open for further rate rises of more than 0.25% in the future. The key focus will be on the labour market, and increasingly on consumer sentiment and spending. We think that market pricing of the cash rate being at 3% by the end of the year seems excessive.

The backdrop of the June meeting is an economy that is running at a solid clip, a very tight labour market, and inflation that is running ahead of expectations – and this rate rise comes after the 0.25% increase at the May meeting. The RBA will continue to remove some of the monetary support that has been in place since the onset of COVID-19, and we expect further rate rises in coming months.

The labour market will continue to be a key input for the cash rate path. Forward indicators, such as job advertisements and employment intentions from the NAB monthly survey, suggest that we are seeing early signs of a cooling in labour demand.

One of the less concerning data points thus far has been wages growth – the Q1 Wages Price Index came in at 2.8% annualised, which is below the RBA’s ideal range of 3% to 3.5%. However, with the labour market tightening we should see higher wages growth in coming quarters. There are certainly a lot of anecdotes out there about higher labour costs, and the RBA’s business liaison program notes the same thing. We also have the upcoming Fair Work Commission decision on the increase in the minimum wage. The new Labor government have signalled support for a 5.1% increase.

Outside of external risks, the RBA seem to be most worried about how the consumer will respond to higher inflation and higher interest rates.  We are already seeing a decline in consumer confidence, with more pessimism about future family finances. Along with inflation and interest rate increases, the slowdown in the housing market is also contributing to some of this decline in confidence. We have seen auction clearance rates decline in recent months and expect further softness as rising interest rates have an impact on affordability. 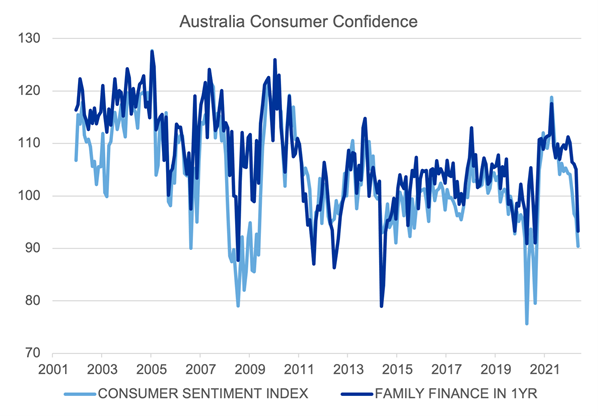 One of the key challenges in monetary policy is gauging where the natural rate of interest (or r-star, to use the economic jargon) is – this is the rate where the central bank is neither accommodative nor restrictive. This rate has to be estimated through time, as it can’t be actually observed – just to add more challenge to the job of a central banker. Our best estimate of r-star for the RBA is 2.6%, but we would note that the high levels of household debt likely mean that the rate is lower. Therefore, whilst we expect that the RBA will raise rates in the next couple of meetings, we do expect that they will eventually pause and let the dust settle.