But then the campaigns got under way…To everyone’s surprise the Conservatives were quickly put on the defensive about hot topics like social care, while Labour found traction on issues such as education and housing. This reversal and subsequent narrowing of the polls turned a coronation into a battle.

In the end, however, that battle was not clearly won.

A hung parliament has now kickstarted a very chaotic and difficult time for Westminster, the outcome of which is difficult to envisage. Could we see Labour and the SNP cobble together a coalition (maybe with the help of the Lib-Dems)? In any case, the UK’s departure from the European Union looks set to be delayed or turned into a very Soft Brexit.

Looking ahead, we think the pound will fall initially, but the downside is limited by favourable valuations (see chart). 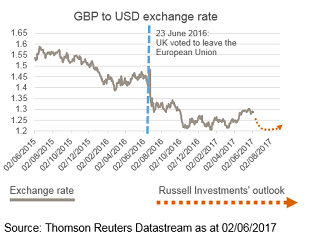 In such an environment, we project that 10-year gilt yields will fall in a risk-off move. If the formation of a government is delayed significantly, this may eventually lead to a review of the UK’s credit rating and higher yields.